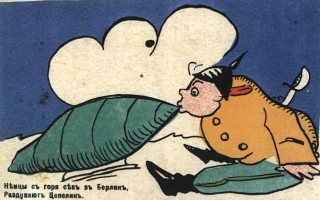 The postcard set published by "Today's Lubok" has a unique style. All cards are made with five pure colors (yellow, black, red, green, and blue). The same shade of each color is used throughout the entire set. Mayakovsky wrote the text for all the postcards. The postcards were printed in Mukharsky typography (details can be found on the verso). The size of each postcard is 9 x 14, which was a standard at the time.

Presumably, in the series were forty-two lithographed postcards. However, the experts or collectors who study this subject still cannot find the images of twelve of them. The postcards in this series are extremely scarce, and most are hard to find on the market. According to specialists on the subject, the rarity of these postcards is associated with the rapid changes due to WWI events and military censorship, as well as part of the postcard circulation having not been fully implemented. The publication "Today's Lubok" did not last long, ending its activities in November-December of 1914.

The remaining postcards have historical and cultural value because world famous artists created them. However, the authorship of many of the works has not yet been established. The only ones attributable are eleven postcards by K. Malevich, one by V. Mayakovsky, and one by D. Burliuk. The authors of the remaining postcards are unknown. Postcards issued by Today's Lubok are less common than posters on the market.

Vladimir Mayakovsky (1893-1930) - Russian Soviet poet. One of the greatest poets of the XX century. He was a prominent figure in the Russian Futurist movement. "LEF" ( "Left Front") magazine editor.

Aristarkh Lentulov (1882-1943) - Russian and Soviet artist, painter, and designer. One of the founders of "Russian avant-garde."

Mikhail Larionov (1881-1964) - Russian painter, one of the founders of the Russian avant-garde.

Vasily Chekrygin (1897-1922) - Russian painter, graphic artist, and one of the founders of the Association of Moscow Artists Makovets. The first illustrated and printed in lithography poetry of Mayakovsky.

Ilya Mashkov (1881-1944) - was a Russian artist, one of the most significant and, at the same time, most characteristic painters of the circle of "Jack of Diamonds" (Russian: Бубновый Валет).