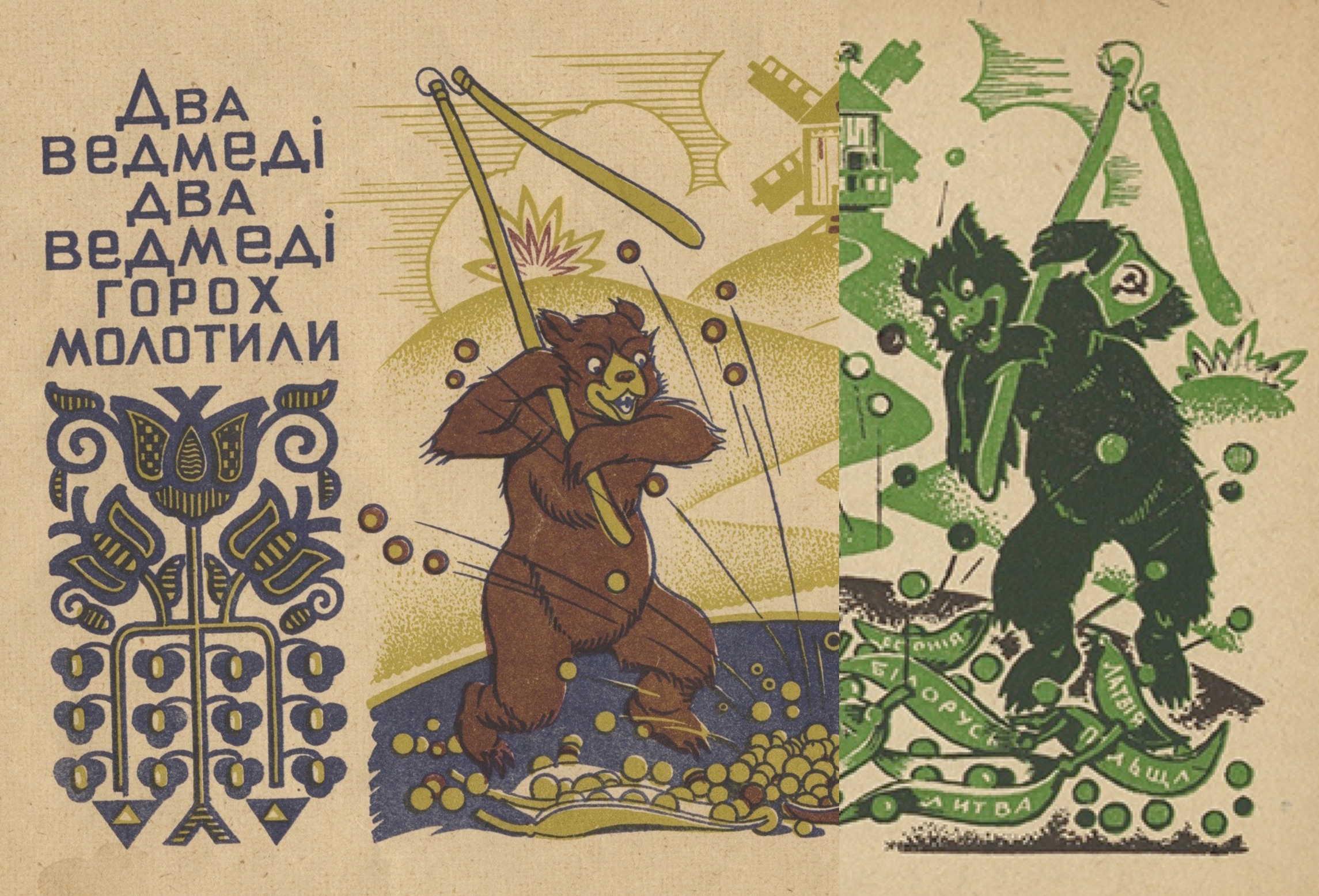 A few years ago, I came across an interesting set of seven Ukrainian-language postcards entitled “Fun Work, a Folk Song in a New Way”, in which seemingly cheerful illustrations for children are powerful Anti-Soviet and anti-Nazi political cartoons. Judging by the pictures, the cards were printed right after Nazi Germany was defeated, and Ukrainian nationalists were intent on having the Soviet regime fall as well.  But neither the picture nor the address sides of the postcards carried any information regarding the publisher.

Years passed, but the origin of the cards remained a mystery.  A number of other postcard collectors familiar with this period were also in the dark regarding the artist, the publisher, and the place and date of their printing. I wanted to find the answers.

A few months ago, I obtained a unique collection of more than one thousand Ukrainian books, the bulk of which are immigrant publications printed in Europe and in the United States between 1918 and 1970.  They are mostly children’s books.  I worked with the collection for a while, cataloging and trying to find further information on some short-run publications, multiple page brochures, and books.  One day I glanced at a little book and knew that I was seeing something familiar, something that I had seen earlier, but I could not immediately remember what it was. After thumbing through the illustrations, I realized that they might be the forerunners of that series of propaganda postcards that I had been investigating.  I took the postcards from the set and began matching them to the illustrations in the book. To my surprise the postcards and their matches were almost like “twins”, but with some important differences.

That small children’s book, Fun Work, a Folk Song, 13x19 cm (Figure 1), was published by the Ukrainian Publishing House in Krakow and Lvov in 1944.  Illustrations for the book were created by a famous Ukrainian children’s book and magazine illustrator, Okhrim (Efrem) Ivanovich Sudomora.  The pictures illustrate lines from a children’s song: “Two bears, two bears, threshed the peas/ Two roosters, two roosters took it to the mill/ And the sparrow, a fine fellow, played the fiddle/ The female sparrow, a pretty bird, swept the cottage/ But the crows, good wives, went dancing/ In flies the hook, the cane strikes and urges them on”.

On the six illustrations in the book, five were used as templates for the propaganda postcard series. (Figures 2-6) based on the title of the book, Fun Work, a Folk Song, and the year of publication, 1944, one may guess that the postcard series, “Fun Work: A Folk Song in A New Way”, was also created by Sudomora during or soon after 1944.  If so, the artist transformed his harmless child’s drawings into powerful Anti-Soviet and anti-Nazi propaganda by changing a number of details such as symbols, slogans, and texts to symbolize the Soviet and German regimes.  The colors were changed from a more cheerful raw umber and olive buff to military green, dark brown, and black.

If it really was Okhrim Sudomora who designed the postcard set, it was a bold move that carried a threat of deadly consequences if Soviet authorities ever found out.  So perhaps it wasn’t Sudomora, but a different artist, who was responsible for those subsequent renditions.  Quite possibly it was someone located in a Ukrainian DP camp in Germany.  Considering the printing and the type and quality of paper, these postcards could well have been produced in post-war Germany.  Of course, if Sudomora designed the postcards, and the similarities in style certainly point to that, he could have sent them to Ukrainian activists in Germany for printing.

Who was Sudomora?  He was an artist and professional illustrator, known as the Ukrainian Aubrey Beardsley.  He was born in Borispol [now Boryspil] in 1889.  He studied in the icon workshop of the ancient Kiev Monastery of the Caves from 1904 to 1907 and continued his education at the Kiev Art School.

In 1913 Sudomora began illustrating children’s and other books for Kiev publishers, as well as for publishers in Vienna and Prague.  In 1914 he designed the Siyanie [Glow] magazine and worked on numerous children’s fairy tale books, including The War of the Mushrooms and Bugs, which was published in 1919 when the Red Army was fighting the White Army in the Russian Civil War.

Beginning in 1924, Sudomora worked with Kharkov and Kiev publishers on a wide variety of books and magazines including the Soviet Village, The Soviet School, October, and the Soviet youth organization’s Pioneer magazine.

In 1943 he moved to Lvov, which at that time was under German control, had a very strong nationalist Ukrainian movement, and was nearing the end of its mass murder of the city’s Jewish population.  He worked there until 1945, illustrating the children’s magazine Small Friends and children’s books produced by the Ukrainian Publishing House.  After Lvov was captured by the Soviet army, Sudomora moved to Kharkov and worked at the Kharkov Regional Book and Newspaper Publishing House, and then in the Ukrainian SSR State Publishing House and for the magazine Soviet School until 1948.

In 1949 Sudomora was arrested on charges of Anti-Soviet activities and sentenced to 25 years in prison. According to one version, the reason for his arrest was a caricature of Stalin with his hands covered in blood. It was said that Sudomora was granted amnesty in 1955 (although there is a story that he was killed in prison by the NKVD).  But according to his grandson, beginning in 1955 Sudomora lived with his wife, his son Yuri, and his daughter Catherine in Kiev.  He died in 1965 (by some accounts 1968) and was buried in the Pechersk cemetery.

We have yet to learn whether this postcard series was a factor contributing to the artist’s fall from grace and subsequent incarceration in Stalin’s Russia due to the nature of its subject matter. The history of these cards leaves many questions unanswered, but this amazing discovery has made it possible to see these postcards from a different angle, with all their inherent mystery, and has compelled us to pay attention to their details, which is what makes them so attractive to collectors.

Figure 1. Front and back covers of the children’s book

Figure 2. The German and Russian bears identified by their swastika and hammer-and-sickle armbands are “threshing” victims from nations like Ukraine, Bulgaria, Lithuania, and others.

Figure 3. The Nazi and Communist secret police “roosters” are taking those bags of victims to be ground in the millstones of the concentration camp.

Figure 4.  Whatseems to be a uselessly uninvolved “sparrow” in fiddling the “It’s not my problem, I know nothing” song.

Figure 5. The crows are cawing their hurrahs to Stalin, the “Leader of the Peoples.” They’ve been prescribed the poison of Comintern through National Bolshevism.

Figure 6. The anti-Nazi “sparrow” is sweeping away “Mein Kampf,” the Nazi flag, and other Third Reich symbols.

Figure 8. This is the “cover” postcard in the “Happy Work” set. It shows two tattered bears, symbolizing Russia and Germany, lugging Bolshevism, Nazism, atheism, class warfare, racism, and other ills to the trash heap of history.

Figure 9. The caption on the final postcard of this propaganda set says, “People will stand up, look around, and will begin scattering them!” It shows a determined, heroic Ukrainian who has broken his concentration camp chains and is going after the fleeing Soviet bear and his sidekick the secret police rooster. The two are heading back to their fortress of “dictatorship” and “jail of nations,” while the German bear is already lying flat on his back.

Figure 10. By superposing an illustration from the book and its politicized postcard version we see how closely they match and where they differ.